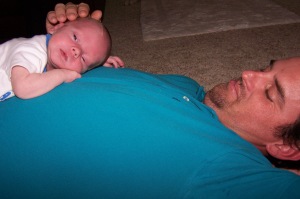 Who is Isaac Makana?

Isaac Makana was born the day before Thanksgiving, 2010 to two loving parents who had waited to conceive him until everything else in their life was reasonably settled (married for over nine years by the time Isaac made his entrance!).

Isaac is a strong, biblical name which is Hebrew for ‘Laughter’. Makana is Hawaiian for ‘Gift’. Our Gift of Laughter. How were we to know he would later be diagnosed with a disease commonly linked to Jewish ancestry, even though neither of his parents had any?

The pregnancy was uneventful and there is no history of genetic disorders in either family. Isaac went home with Mom and Dad on Thanksgiving Day and while he lost just over 10% of his birth weight in the first week, he quickly gained it back and went on to gain two pounds a month for many months after. Isaac was a strong boy, meeting many of his initial milestones early. He had great neck strength and head control from the get go. His smiles and giggles bring so much joy to all who surround him. He learned to sit early on and by seven or eight months could sit unsupported for 45 minutes at a time and play with his toys.

The journal entries that detail Isaac’s diagnosis of Tay Sachs Disease (classic/infantile) begin in June, 2011 at the age of 7 months.

Our journey to cord blood transplant at Duke Medical Center begins in September, 2011. He received his transplant on October 14, 2011. He dressed as a Rock Star for his first Halloween, while inpatient at Duke and he has been our Rock Star ever since.

Isaac was able to return to San Diego end of May, 2012 where he continues to fight against seizures, orthopedic issues and infections. We are blessed to be able to say now that Isaac does not have an ‘expiration date’. We are blessed every day that we get to cuddle and love on him. We are always looking for therapies to strengthen him body and mind.